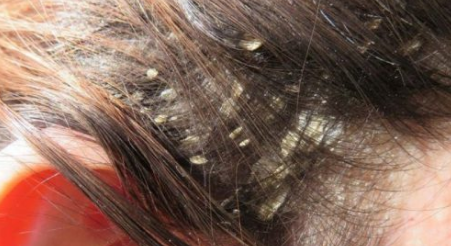 Dandruff, Causes And Symptoms And How To Overcome It - One of the most irritating hair problems is dandruff. In addition to looking dirty, sometimes very often make annoyance, especially if dandruff to scatter on the ground of course will make you more furious. Dandruff is very severe must be scattered on your shirt that makes you appear not confident.
In general, dandruff is caused by a fungus that thrives on your head. Maybe you've done a way to remove dandruff by using anti-dandruff shampoo but dandruff still not lost even tend to be more severe. What exactly is the cause of dandruff on a person's scalp?

THE CAUSE OF DANDRUFF

The body will regularly knock out dead skin cells after forming new skin cells. The problem is skin cells that grow and die too quickly. Faster skin cell death eventually results in dandruff. The cause of accelerated growth and also the death of skin cells is still unknown.
Research conducted by Jiao Tong University to 59 participants aged between 18 to 60 revealed that the presence of fungus on the scalp is the most frequent cause of dandruff on the surface of the scalp. In protecting the skin from bacteria and moisturize the skin, sweat glands produce sweat or known as Sebum . But apparently, the fungus that is on the scalp of a human named Malassezia is a typical fungus that eats the fatty substances contained in sebum.
Malassezia, which eats sebum and produces residual digestion in the form of fatty acids that can make the scalp irritation to finally inhibit the metabolism and growth of new scalp cells. The disrupted growth of scalp cells will lead to scalp peeling, which is characterized by an itchy white scaly dead skin. Dandruff can even cause infections that can be very harmful to the skin, hair and eventually to the rest of the human body. Most of the side effects of decaying dead skin on the head are very dangerous and can cause serious problems. Here are some of the causes of dandruff on the scalp, including:
1. Scalp Type Factor
Everyone has different types of scalp, so the way to deal with it is different. For that, it is advisable to consult and check your scalp so it can be known how good way to overcome them.
2. Experiencing Overheated On The Scalp
Overheated scalp can lead to dandruff, this can be caused by too long hair overheating under the blazing sun, frequent use of hair dryer after bathing and can also be caused by the use of a head cover in wet hair condition. So when using head coverings like hoods, hats, helmets wait until your hair is dry by itself to prevent dandruff growth.
3. Age
If you are between 15 and 35 years old, do not be surprised if you are more often dandruff. The cause of dandruff is supported by a study revealing that sebum production increased from age 15 to 35 years. Increasing sebum will certainly increase the presence of fatty acids on the surface of the scalp.
4. Rarely Shampooing
Rarely shampoo can be one cause of the appearance of dandruff. The reason, when you do not shampoo in a long time the scalp will be oily and skin cells from your head will appear a fungus that causes dandruff.
5. Sensitive To Hair Care Products
Not everyone is compatible with certain hair products. Each head has different scalp and hair type. Well, sometimes someone has a sensitivity to certain ingredients or products of hair care, such as hair dye. Especially Paraphenylenediamine which can cause red scalp, itching and scaly. In addition, too frequent shampooing and using styling products can make irritation of the scalp that cause dandruff.
6. Food Factor
Food factors can cause the occurrence of this white problem, this is because if the lack of eating foods that contain iron and B vitamins can be at risk of having white problems.
7. Stress
A person who often experiences stress can not only affect one's health, but also very susceptible to having dandruff problems. This is due to hormonal changes in the body, resulting in changes in your scalp condition.

Research published in The Indian Journal of Dermatology , Blepharitis is an eye infection that is often caused by dandruff. This infection is characterized by red eyes, itching and irritation appear on the eyelids. In addition it appears like a dead scalp on the lashes.
Asthma is one of the side effects of dandruff. When the dead skin tumbles to the shoulder and often you may inadvertently inhale so that it causes lung infections.
Dandruff will destroy the natural ingredients from the scalp, so the hair becomes falling out. You should be prepared to risk the hair loss when caught in the attack of this disease in the hair. Although hair oil producers claim to have successfully overcome the dryness of the scalp, but still dandruff can not be eliminated from hair forever.

In general, dandruff symptoms are easy to see that is white powder, dead skin flakes on the head of an oily form of dots on the hair and shoulders and itchy. This type of dandruff called Cradle Cap can be affected in infants. This disease, which causes scalp loss, is most common in newborns, but can occur anytime until childhood. Although a warning to parents, the cradle cap is harmless and usually disappears with time. Dandruff has the following symptoms
1. The presence of Flakes
This is the most easily visible and most embarrassing sign. These flakes are a sign that the skin on your head is falling out and the turnover time of the cells on the scalp becomes faster. White flakes or scales of various sizes and shapes on the scalp, hair, can also be attached to your favorite black shirt. Scalp cell turnover is usually undetectable by the eye. However, by accelerating this change process, it causes dandruff. So, every grain or scales you see is actually a collection of scaled cell cells.
2. Itching
One more sign that you are dandruff is itching on the scalp. The itching occurs due to inflammation of the scalp caused by the P.Ovale fungus. This fungus that causes dandruff and itching on the scalp.
3. Redness
The third mark of dandruff is known as seborrhea. In this condition, it looks reddish around the scalp. Can also be seen around the eyebrows, cheeks, behind the ears or the chest.

HOW TO OVERCOME DANDRUFF

Dandruff can be removed in several ways, both medically, non-medically and traditionally. Here are some natural dandruff medicines commonly used, even the following ingredients can also relieve itching in the head, nourish hair, black hair and smooth hair. So, what natural ingredients that can help overcome dandruff? Check out the reviews below:
1. Olive Oil
Olive oil can be easily purchased at the nearest minimarket. The way of usage is also very easy. apply olive oil on the hair, try to hit the scalp. Because it is in this section that is problematic. Do not forget to give a gentle massage to easily sink in. Imaged for 30 minutes, then rinse with clean water like bias. For more easy do 30 minutes before bathing.
2. Use Vinegar For Dandruff Medication
Use apple vinegar as a potent dandruff remedy. How to use apple vinegar with the same amount of clean water. Apply a mixture of apple vinegar on the scalp evenly. Let stand for a few minutes then wash thoroughly. In addition to removal of apple vinegar dandruff can also eliminate itching on the scalp.
3. Aloe vera
Aloe vera or aloe vera is a plant that has a myriad of benefits such as eliminating acne and overcoming dandruff on the scalp. Aloe vera can remove dead scalp cells and can also kill fungi that may nest on your scalp. In addition, aloe vera gel has a cold effect that can relieve itching and inflammation of the scalp.
4. Egg yolk
Usually, the most widely used part of the egg for health is the egg whites. This is not surprising because egg whites contain many proteins that can support health, especially skin health. For that reason, egg white is widely used as a way to get rid of acne and how to remove acne scars. However, it turns out the yolk is also very useful to maintain your health, especially to eliminate dandruff. Yes, egg yolk contains biotin which will be very useful to overcome dandruff and provide nutrition for your hair.
5. Baby Oil
Baby oil or so-called oil telon this does have a major function to warm the baby's body. However, this baby oil was also very powerful to remove stubborn dandruff on the scalp. This is because baby oil does not contain the nutrients needed by the fungus to grow. Instead, this baby oil will eradicate the fungus and prevent the occurrence of dandruff in the future.
6. Pandan leaves
Pandanus leaves are usually used for natural green dyes or for food. But this time we will use pandan leaves to overcome dandruff naturally. Puree panda leaf, if necessary we can mash until smooth. Do not use a blender, just by pounding. then add a little warm water and rinse the head with this pandan leaves.
7. Kale
Kangkung is one of the common food ingredients used for cooking. But it turns out that water spinach can also be used to make medicine dandruff. Boil kale leaves with 2 glasses of water, use this cooking water to wash your hair and head.
Some ways and tips on eliminating dandruff are naturally described above. Keep your scalp and hair always in a healthy condition and hopefully your hair is free from stubborn dandruff. Based on the above descriptions above, a little more we already know why dandruff can grow, can bother us. And what is the main cause of dandruff. So dandruff is the dead skin cells that grow on the surface of the scalp.
cici 11/30/2017
Related Posts
UMUM
By. cici On. 11/30/2017